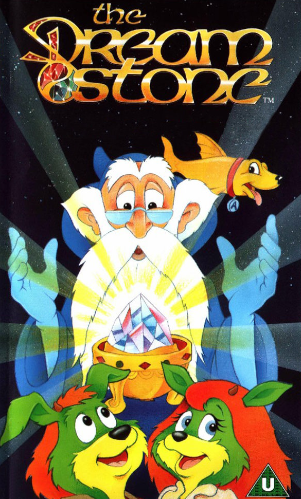 "Once more we travel to the Land of Nightmares to discover, there beneath the black mountain of Viltheed, the loathsome ZORDRAK, Lord of Nightmares, hatching his monstrous plots to thwart the Dreammaker so that nightmares might rule!"
"Far from Viltheed to the Forest of the Wuts, where Pildit, leader of the Wuts, and his companions guard the Land of Dreams. The Noops live in the Land of Dreams; these are two of them, Rufus and Amberley, assisting the Dreammaker and his watchdogfish Albert in the sending of tonight's dreams through the most precious and powerful object in the land - The Dreamstone!"
— The Dreamstone intro
Advertisement:

Cult CITV children's Animated Series from the early 1990s. Noted both for the quality of its animation and its Mike Batt soundtrack, including cameos from such unlikely people as Ozzy Osbourne and Billy Connolly.

Almost every episode has basically the same plot: Zordrak, the Evil Overlord, sends three of his sympathetic Mooks, the Urpneys, across the dangerous zone between the Land of Dreams and the Land of Nightmares with the assistance of Mad Scientist Urpgor and his inventions, which tend to be pedal-powered. The Urpneys' task is to steal the Dreamstone, the mystical object through which the mysterious Dreammaker sends his dreams every night to the people of the Land of Dreams, and protects them from Zordrak's nightmares. They are thwarted every week by Rufus and Amberley, the Dreammaker's Noop assistants, occasionally with Pildit and the Wuts.

Despite this, the series also played with story arcs and guest stars to shake up the basic plot. Four seasons were made (1990-1995) , after which the same team made a Spiritual Successor, the less-well known Bimble's Bucket.

Aside from sporadic DVD and online releases of odd episodes, the show remained in obscurity for a while after airing, though the whole series (except for "The Daydream Bubble") is now available officially on Youtube

has resulted in a simple tabletop miniatures game, and also a tabletop RPG (featuring locations and lore not featured in the show) that puts players in the tattered shoes of the hapless Urpneys as they try to fulfil Zordrak's evil whims - or rather, not fail at doing so badly enough that he kills them. A planned second Kickstarter will feature more miniatures (including a not-so-miniature Zordrak himself) and expansions fo the RPG featuring extraterrestrial locations, the Nightmare Stone and the ability to play as good and unaligned characters.

Refer to the character sheet for more details.

Rufus and Amberley discover that their nemesis Zordrak was once a member of the Council of Dream Makers, but he was banished for using his power to create nightmares. Also includes a clip from the show's opening to show what Zordrak is like in the present day.

Rufus and Amberley discover that their nemesis Zordrak was once a member of the Council of Dream Makers, but he was banished for using his power to create nightmares. Also includes a clip from the show's opening to show what Zordrak is like in the present day.