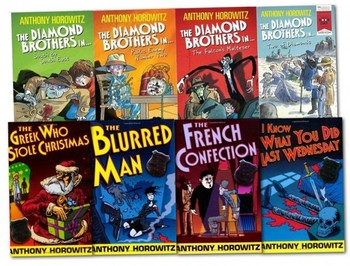 "Tim's first job was to find some rich lady's pedigree Siamese cat. He managed to run it over on the way to see her. The second job was a divorce case - which you may think is run-of-the-mill until I tell you that the clients were perfectly happily married until he came along. There hadn't been a third case."
— Nick Diamond, The Falcon's Malteser
Advertisement:

Series of detective/comedy novels by Anthony Horowitz, featuring would-be private eye Tim Diamond (real name Herbert Simple) and his kid brother Nick. Despite believing himself to be a genuinely brilliant detective, Tim is utterly hopeless, and all of the cases are solved by Nick him despite never getting any credit, with the occasional help or hindrance of supporting characters Chief Inspector Snape of Scotland Yard and his sidekick Boyle.

The novellas have been collected in Three of Diamonds (later retitled Four of Diamonds with the release of The Greek Who Stole Christmas). The first novel was adapted for the big screen in 1989 under the name Just Ask For Diamond, and South by South East was made into a TV series in 1991 using the same cast. A final novella intending to act as a Grand Finale, The Radius of the Lost Shark, has been in Development Hell since at least 2003, with Horowitz still promising it will be published as recently as 2020. A short story, "The Double Eagle Has Landed"

, was published in the Guardian in 2011, and in 2020 Horowitz announced a new story, Where Seagulls Dare, was to be released online chapter-by-chapter during the 2020 coronavirus pandemic; it was later released as a book, the first full-length entry in the series in over 30 years.