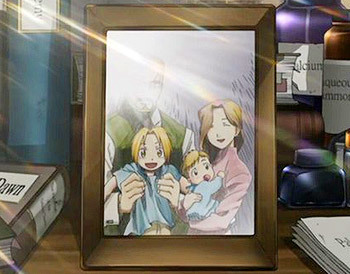 Let me guess. That reflection is hiding some big plot secret?
Advertisement:

Sometimes, being able to see someone would enable the viewer to wrap up some important part of the show's mystery well beforehand. Commonly, a character will have a photograph of himself next to someone who is obscured by Lens Flare, a deep shadow or some other obfuscation. In any event, you can be sure that, whoever the obscured person is, he's going to be important to the plot.

Since this trope is associated with plot twists, all spoilers will be unmarked ahead. Beware!