Literature / A Series of Unfortunate Events 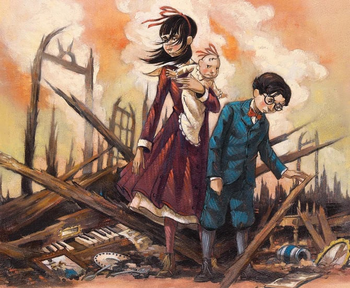 Wouldn't you rather read a story about a happy little elf?
"PLEASE READ SOMETHING ELSE."
— Lemony Snicket
A series of Black Comedy-filled children's books by Daniel Handler, under the Pen Name "Lemony Snicket."
Advertisement:

After their parents die in a fire at the family mansion, Violet, Klaus, and Sunny Baudelaire remain in the care of Count Olaf. As their sinister distant relative, Olaf wants the Baudelaire family fortune, which the children will inherit when Violet turns 18. Throughout the first few books in the series, the children are sent from one caretaker to another, each one more eccentric and troubled than the last. Count Olaf is following them in a series of Paper Thin Disguises that only the children immediately see through. Eventually, the children must strike out on their own to discover their family's dark secret - their parents' connection to a mysterious organization. Everywhere, bizarre and improbable disasters strike the children and everyone around them for no discernible reason.

The series has a movie and a video game based on said movie. Lemony Snicket narrates throughout, providing commentary, anecdotes, and advice - usually against reading any more of his history of the Baudelaire orphans. While the movie never moved past one installment, Netflix obtained the film rights

and adapted the books into a live-action series. This series premiered on Friday the 13th of January 2017, with Barry Sonnenfeld and Handler himself as showrunners; Patrick Warburton portrays Lemony Snicket, and Neil Patrick Harris plays Count Olaf.

A four-part prequel series called All the Wrong Questions concerning a young Lemony Snicket working for VFD was later released.

A Series of Unfortunate Events: