Literature / Seven Days in May 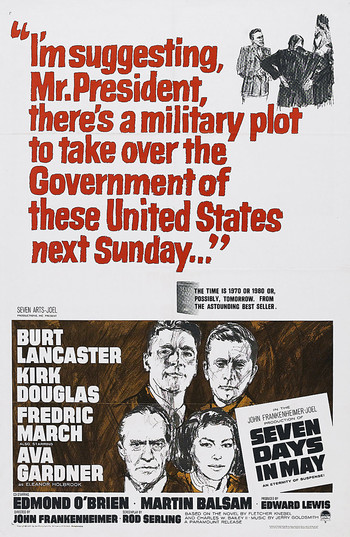 Seven Days in May is a Conspiracy Thriller about an attempted Military Coup in the United States. The story first appeared as a 1962 novel by Washington journalists Fletcher Knebel and Charles W. Bailey II. It was adapted by Rod Serling into a 1964 Film of the Book, directed by John Frankenheimer and starring Kirk Douglas, Burt Lancaster, Fredric March, and Ava Gardner.

President Jordan Lyman (March) is about to sign a treaty with the Soviet Union for the complete disarmament of both countries' nuclear weapons. This has caused a record slump in his popularitynote you would think this would increase it but people feared the USSR would cheat—and in the novel, the Soviets did just that and the public opposition of the Chairman of the Joint Chiefs of Staff, the charismatic and respected USAF General James Mattoon Scott (Lancaster). Lyman is determined to proceed with the treaty regardless, but then a Pentagon officer, USMC Colonel Martin Casey (Douglas), approaches him with a shocking revelation. He believes that General Scott is planning a Military Coup, to be staged during a troop mobilization exercise at the end of the week. Although his staff are skeptical, President Lyman is not so sure. He now has only seven days to find proof that the most popular general in the country is planning treason, and stop him.

When the movie was being filmed, President John F. Kennedy gave the producers special access to the White House. The President would even conveniently arrange to visit Hyannis Port for a weekend when the film needed to shoot outside the White House. The Pentagon, in contrast, refused to cooperate at all, leading to the filmmakers doing a bit of covert filming outside the building with star Douglas in costume.

JFK — who was assassinated shortly before the film's release — considered the film so important because he believed the events in the book and movie could very well happen. After the spat between Douglas MacArthur and President Harry Truman, as well as JFK's own problems with his generals, he was well aware that there were those in the military who felt they should be in control of the country instead of him.

The story is said to have been influenced by the right-wing anti-Communist political activities of General Edwin A. Walker

after he retired from the military. The authors got the idea for the book after interviewing then Air Force Chief of Staff Curtis LeMay

Seven Tropes in May:

Alternative Title(s): Seven Days In May