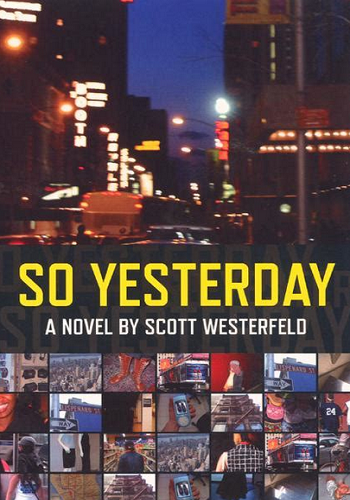 So Yesterday is a stand-alone novel by Scott Westerfeld, exploring the science of cool.
Advertisement:

Ever wonder who was the first kid to keep a wallet on a big chunky chain, or wear way-too-big pants on purpose? What about the mythical first guy who wore his baseball cap backward? These are the Innovators, the people at the peak of the cool pyramid.

Seventeen-year-old Hunter Braque is a Trendsetter, on the second level of the pyramid. His job: Find the newest, coolest thing for the retail market. His MO: Observe; don't get involved.

But he has to get involved when he and his crush, Jen, discover his cell phone belonging to his boss in an abandoned building— and his boss missing. Hunter and Jen are soon snared in a web of brand-name intrigue: a missing cargo of the coolest shoes they've ever seen, ads for products that don't exist, and a shadowy group dedicated to the downfall of consumerism as we know it.

Not to be confused with the song by Hilary Duff.