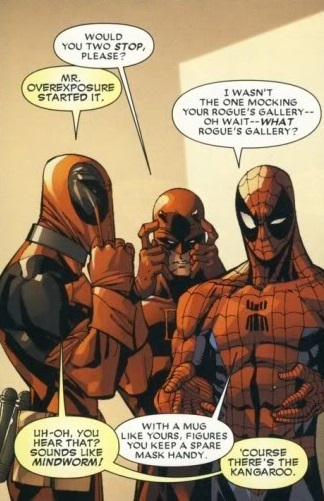 Lucius Fox: ...I've come to explain to you why we're going to have to put our deal on hold. We can't afford to be seen to do business with, well, whatever it is you're accused of being. A businessman of your stature will understand.
Lau: I think, Mr. Fox, that a simple phone call would have sufficed.
Lucius Fox: Well, I do love Chinese food. And Mr. Wayne didn't want you to think we'd been deliberately wasting your time.
Lau: Just accidentally wasting it.
Lucius Fox: [chuckle] Very good Mr. Lau. "Accidentally".
— The Dark Knight
Advertisement:

Much like having different hammy actors in the same work, sometimes putting two snarky characters into the same works and having them interact in some form of discussion (especially an argument) can seem like a competition in sarcasm. This often makes it a little easier to tell which character is more of a snarker; it can also be a sign of Belligerent Sexual Tension, as it's a form of combat in which the antagonists suffer no actual physical damage, and many of the attacks can double as denials of the attacker's true feelings for the target (or be interpreted as such).

See also Volleying Insults and World of Snark. Well, Excuse Me, Princess! is a specific version of this between a snarky hero and a snarky princess. Also may figure in Passive-Aggressive Kombat and Politeness Judo. Bantering Baddie Buddies often engage in conversations like this.

Alternatively could be called "having a sass off".

Not to be confused with cruise missile warfare.

Sole Survivor: An evil king in a sub shop? Does a meatball monster show up at some point?
Nick Valentine: From what I've heard, the pastrami golem is the one you really have to watch out for...

This culminates with Deimos grappling Adonis and Donny giving an excellent Pre-Asskicking One-Liner, telling Deimos he dropped something, when Deimos asks what, Donny stabs him in the neck with the tip of his own broken sword.

It proved not entirely accurate: Seyss-Inquart was sentenced to hanging, not shooting, during the Nuremberg Trials.

Patricia meets her match in the equally-snarky Eddie.

Patricia meets her match in the equally-snarky Eddie.