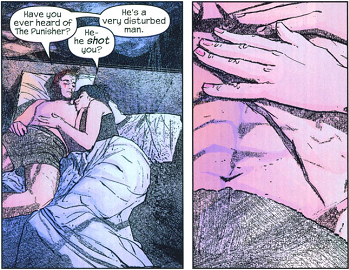 She would gladly have spent her whole life touching Daario, tracing his scars and making him tell her how he'd come by every one.
— A Song of Ice and Fire
Advertisement:

A scene (often before or after sex) where the heroine asks the hero how he got the various scars on his body. This gives him a chance to reveal his badass nature or Mysterious Past without appearing boastful to the audience. If this scene happens before the two become lovers, it's a good opportunity for Fanservice and Unresolved Sexual Tension as she studies his body closely.

Tends not to be gender-reversed as Beauty Is Never Tarnished. When women do have scars it's meant to hint at a Dark and Troubled Past, which they are often unwilling to talk about. But there are exceptions, as seen below.

Can combine with acquiring new scars, in the After-Action Patch-Up.

How Joe Got His Scars

While making love, Joe reveals the backstory of his chest scars but comes up with lie after lie.

How Joe Got His Scars

While making love, Joe reveals the backstory of his chest scars but comes up with lie after lie.