Film / The Return of Swamp Thing 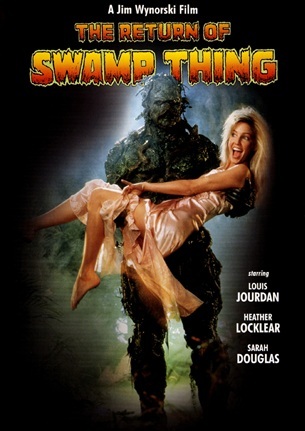 Once Upon a Time...
...in the Swamp.
Advertisement:

The Return of Swamp Thing, is a 1989 sequel to Swamp Thing. It is directed by Jim Wynorski with the screenplay by Neil Cuthbert and Grant Morris. It was released on May 12, 1989.

Dr. Alec Holland, or rather Swamp Thing, is still living in the swamp, avoiding Dr. Arcane's men and helping people when needed to. Anton Arcane himself has managed to regain his humanity, thanks to his currents assistants Dr. Rochelle and Zurell, and is still searching for Swamp Thing in hopes of gaining immortality from his DNA. He has invited his stepdaughter Abigail to his mansion, as he needs her DNA as well for the operation. Ignorant to his motivation, Abigail agrees to visit him in hoping that she'll learn what happened to her late mother. Later on she meets up with Swamp Thing, and a romance develops between the two as he fights it out with Arcane's men and mutants.

The Return has the additional examples: