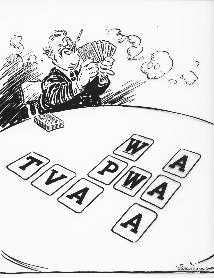 Characters get their acronyms confused, often involving mistaking one for another, and/or misremembering an acronym severely enough to intend to refer to one acronym, but actually mention another.

Subcategories include acronyms being confused due to sharing an initialism, and acronyms getting mixed up for other reasons.

See also Fun with Acronyms and Acronym and Abbreviation Overload. Can overlap with Name's the Same.