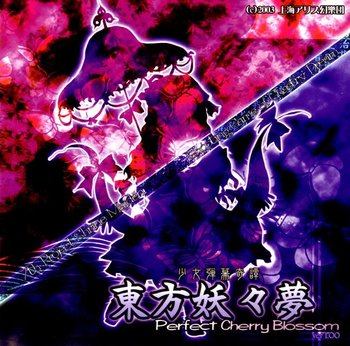 The Touhou craze has started, and there's no stopping it.
The next world, resplendent with sin-laden cherry blossoms.
Unseeable in life; unseeable again in death.
Advertisement:

Touhou Youyoumunote roughly "Ghostly Dream" - youyou is normally "gradually", but here it's spelled like the first half of "youkai" ~ Perfect Cherry Blossom is a video game created by Team Shanghai Alice for Windows computers in 2003. It's the seventh installment in the Touhou Project franchise.

It's May, and Gensokyo is gripped by an unnaturally long winter. But cherry blossoms float on the wind, meaning somewhere is still experiencing spring. Reimu Hakurei, Marisa Kirisame and Sakuya Izayoi set out to follow the trail to its source, gathering every drop of spring they can find along the way.

While Embodiment of Scarlet Devil is the start of the Windows series, it's Perfect Cherry Blossom that gives Touhou a defined setting and kicks off its Myth Arc, differentiating it from the anything-goes days of the PC-98 games.

The game features the Cherry Points mechanic. Shooting enemies gives Cherry Points, bombing or dying reduces them, and getting 50000 of them grants a temporary shield.