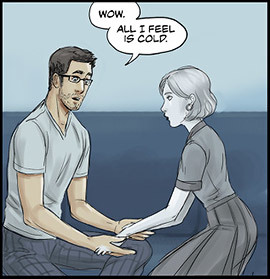 "You ever feel the prickly things on the back of your neck?
And the tiny hairs on your arm, you know when they stand up?
That's them. When they get mad... it gets cold."
— Cole Sear, The Sixth Sense
Advertisement:

One side-effect of the manifestation of ghosts or other spirits of the dead is coldness. Mirrors and windows may frost over, people's breath may make visible steam, and someone may comment on how cold it has got all of a sudden. The feeling may be especially acute if someone is being walked through, or is walking through, an immaterial ghost.

Sometimes this is explained by the ghost drawing on ambient heat energy to manifest (often with a fine disregard for thermodynamics), but just as often it's merely an unexplained side effect of ethereal activity. Objects that are ghost-touched often exhibit this trait as Thermal Dissonance.