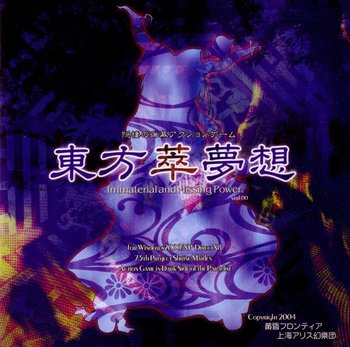 Touhou Suimusounote "Gathering Reverie" ~ Immaterial and Missing Power is a video game created by Team Shanghai Alice and Twilight Frontier for Windows computers on 2004. It's the 7.5th videogame installment in the Touhou Project franchise.

The unusually long winter has passed, followed by a brief spring, and now Gensokyo enters summer. But despite the Cherry Blossoms having long since fallen from the trees, its inhabitants find themselves continuing to hold flower-viewing parties at the Hakurei Shrine every three days, surrounded by a strange mist. Who is compelling people to gather and feast, and for what purpose?

IaMP is the beginning of Touhou's Fighting Game subseries, featuring 11 playable characters and a focus on projectiles. For more gameplay info, see the wiki

The game has two official websites (both in Japanese): by Team Shanghai Alice

and by Twilight Frontier