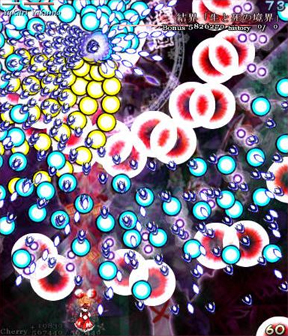 Dodge this.
"The person who had done this might as well try to dodge water particles while taking a shower or radioactive particles during a nuclear fallout."
— YouTube commenter on Touhou Project Ultra mode.
Advertisement:

Bullet Hell (called danmaku, meaning "barrage", in Japanese, literally "bullet curtain" when translated to English) shooters are a subgenre of Shoot Em Ups that test both your dodging skills and your resistance to seizures. To put it simply, they're (usually vertically-scrolling) shooters where all the enemies have lotsa dakka. They often feature extremely elaborate and beautiful patterns of bullet flows, especially for bosses, with hundreds and sometimes thousands of bullets on the screen at once, requiring constant weaving and pattern memorization in order to get the elusive S++ ranks. Not so painfully slow when they cover the screen, eh, tough guy? These games also tend to have True Final Bosses.

However, the genre is not always as Nintendo Hard as it seems. The player's hitbox is often very small, sometimes only one pixel. In addition, the majority of enemy bullets are sprayed wildly and are not actually aimed at the player. Finally, the player is almost always given some variant of the Smart Bomb, which will remove bullets from the screen. Most modern bullet hell games give the player another way to avoid being killed, such as hypers in DoDonPachi, Touhou Project's deathbombs, or Giga Wing's Attack Reflector. Though by no means easy, a bullet hell game can be cleared without memorizing patterns or continuing. In fact, Bullet Hell games tend to be just as surmountable as older, less bullet-intensive games. It should be noted that if you do happen to come across an actual arcade Bullet Hell game, you will know that bullet-intensive areas tend to make the bullets slower. This is because the hardware used to create the bullets is slowing down, and can't process them all at the same time, and modern ones used to create even recent games like the DonPachi series have hardware comparable to that of home consoles. Again, that's a lot of dakka.

The types of projectiles fired by enemies and bosses will almost always be colourful Energy Balls to make it easier to tell them from the background, and so you can distinguish them from your own bullets.

Can (and more often than not does) overlap with Cute 'em Up. Usually unrelated to Platform Hell - most of these games are consistent about following their own rules and don't depend on cruel surprises.

Please note that this trope is for games where there are a remarkably high number of bullets on the screen. It is not a catch-all term for the shoot-em-up genre, although most Bullet Hells are super-classed as shoot-em-ups, and just because a shmup is Nintendo Hard does NOT mean it is a Bullet Hell game. A rule of thumb is: if you can count exactly how many bullets there are from just a quick glance of the screen, it most likely isn't one. By the same token, a Bullet Hell game doesn't have to be Nintendo Hard, though most of them are.

Tropes commonly featuring in the genre include:

Examples of this genre include: