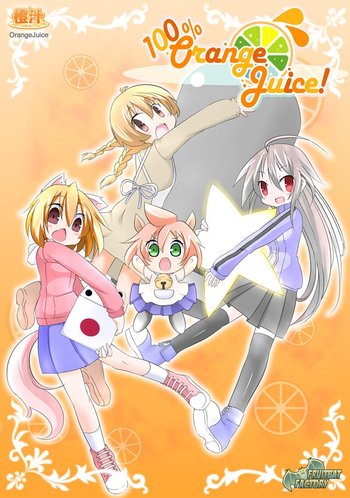 100% Orange Juice is a virtual boardgame developed by the doujin group Orange_Juice in 2009, to celebrate their 5th anniversary. It features characters from their previous titles such as SUGURI, sora, Flying Red Barrel and QP Shooting to create a crossover for their various games. It was localized by Fruitbat Factory and released on Steam and Desura.

The average game is a 4 player free-for-all; players select their character which each have unique stats (HP, Attack, Defense, and Evade) and their own special Hyper card. Then they build a deck of 10 cards which is then pooled into a larger deck of the other players' cards. From here, dice are rolled and players move across the board, attempting to complete “norma” by either collecting enough stars or battling enemies and other players for wins. For each norma completed, they gain levels, and the first one to reach level six wins. It also features multiple campaign modes, having the casts from Orange_Juice’s various games try to figure out what is happening.

In the end, it’s a game about the RNG and how much it hates you.

Now has a sequel for Orange_Juice's 10th anniversary in 2014, called 200% Mixed Juice, a Role-Playing Game adventure starring the characters introduced in 100% Orange Juice. A Kickstarter campaign

was made in January of 2018 to raise funds to make a line of plushies, the goal was met within the first three days!