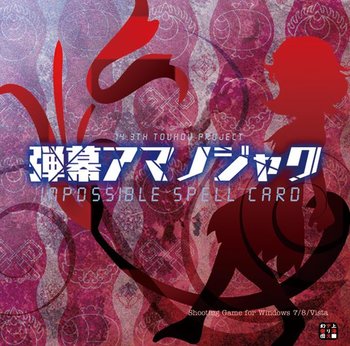 Impossible? Come on, it can't be that hard...
Advertisement:

Danmaku Amanojaku ~ Impossible Spell Card is a video game created by Team Shanghai Alice for Windows computers in 2014. It's the 14.3th videogame installment in the Touhou Project franchise.

After the events of Touhou Kishinjou ~ Double Dealing Character, the amanojaku troublemaker Seija Kijin has been collecting some of the tools that were corrupted by the dangerous energies of the Miracle Mallet. Alarmed, someone places a bounty on Seija's head, and many youkai set out to claim it. Seija's opponents are no longer interested in a civilised duel, so they wield illegal Spell Cards designed to be impossible to dodge... but they're not the only ones willing to cheat, and Seija will use every trick in her new arsenal to snatch victory.

The game has a similar overall structure to Touhou Bunkachou ~ Shoot the Bullet, being divided into groups of short "scenes" instead of stages, but with more conventional gameplay. Seija can equip one of nine "cheat items", each with a Game-Breaker power, and later can equip a second item for a passive ability.

A single-stage "Score Attack" edition of the game named Danmaku Amanojaku Gold Rush was playable at Tokyo Game Expo 2014, where Seija uses the Miracle Mallet to convert Reimu's bullets into coins (similar to the gameplay of Fairy Wars). Gold Rush is non-canon and has never been publicly released.