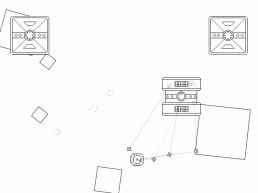 A game by cactus. It can be downloaded here

It plays like a standard Bullet Hell Shoot 'em Up; however, the ship's two special weapons—homing bombs, and an ability to instantly delete all enemy projectiles on screen—only function if the player activates them in time with the beat in the background. That's something the player better learn doing, since the ship's standard weak weapon certainly won't let them cut through all the enemies and kill the boss within the game's one-minute limit.

The game displays the following tropes: