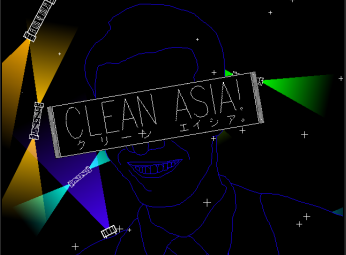 "You will all regret what you've done to me the day that your eyes turn against their masters."

Clean Asia is a freeware Shoot 'em Up developed by cactus, the same guy behind Mondo Medicals, Mondo Agency and Hotline Miami.

Set in the seventh millenium, the eyes of Earth's humanity go batshit and take over the Earth by flying to the moon, developing weapons of mass destruction, and flying back with their new weapons, starting with Asia. Two American pilots are sent in to clean up Asia.

The two playable characters are:

There are three stages in the game: Thailand, Korea, and China. Thailand and Korea are Boss Rush stages in which you destroy one boss after another. China is more like a regular shmup stage, except with five pipes at the bottom of the stream providing you with a continuous flow of debris, and these pipes are destroyed later on in the stage.