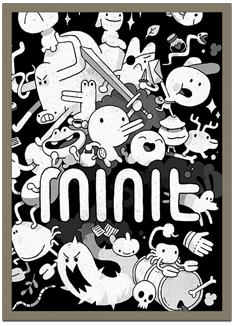 Minit is a video game developed by Devolver Digital and released on PC, X Box One, and PS4 on 3 April, 2018, with a release for the Nintendo Switch set for later in the year.

In Minit, the player controls a normal person who stumbles on a cursed sword; at the end of every minute thereafter, the person dies and returns to their home, in perfect health minus the time over their head. The player must explore the environment and make what progress they can in sixty-second intervals in order to lift the curse.

On February 18, 2021, a spin-off was released: Minit Fun Racer, a Racing Game. 100% of its proceeds go directly to charity, making it a fun racer AND a fundraiser.