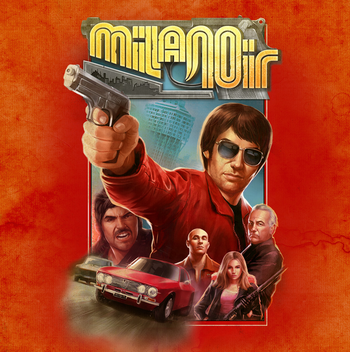 Milanoir is a Run-and-Gun game, developed by Italo Games and released on PC, Playstation 4 and Nintendo Switch in May 31, 2018, with a Xbox One version following on June 8th.

The story is styled after the so-called "poliziotteschi", the Italian crime movies of the 1970s that inspired Quentin Tarantino, as the creators proudly claim. You control a Milanian hitman Piero Sacchi, who gets imprisoned for life at the start of the story, after he goes too far during a hit and wipes out his target's wife and child, which prompts a fellow gangster to rat him out to police.

Three years later, he's let out thanks to the boss of the Lanzetta family making a few well-placed contributions. Now, he expects the investment into Piero to pay off, since no-one else under his command seems capable of dealing with the ambitious rivals muscling in on the Lanzetta turf. And while he's busy doing wet jobs for Lanzetta, Piero himself is just as determined to find whichever rat set him up.