Our Ghosts Are Different 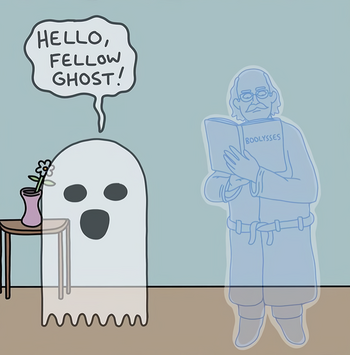 "What is a ghost? A tragedy doomed to repeat itself?"
— The Devil's Backbone
Advertisement:

Ghosts in fiction are usually people who have died, but their spirits are still lingering around. Some are friendly, some are neutral, and some are scary and vengeful. It all depends on what kind of story is being told.

Interaction with the living

Some good ghosts get to Ascend to a Higher Plane of Existence (either literally heaven, or something else) once they've sorted out their issues or unfinished business.note In some fictional universes, the only ghosts are people who ascended to a higher plane of existence, but who still choose to interact with us mere mortals. Bad ones can get the express elevator all the way down. Some of them have problems with Ghost Amnesia. Every ghost has different Ghostly Goals, again depending on what they want.

Shows and movies will usually address these baseline rules, whether or not they're enforced.

See also Our Souls Are Different. Compare Living Memory. Despite the name, The Ghost is not usually an example.

Compare The Disembodied, for when they lost their corporeal form without being "dead". The Ghost King is a sub-trope.

Needless to say that as ghosts are the dead, and resolving their issues often reveals details about their death: SPOILER WARNING. Please proceed at your own risk!