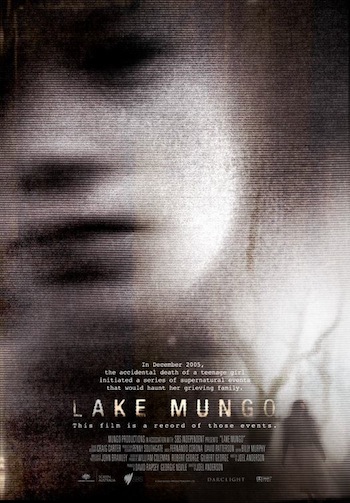 Lake Mungo is a 2008 Australian horror film. Sixteen-year-old Alice Palmer drowns while swimming in the local dam. When her body is recovered and a verdict of accidental death returned, her grieving family buries her. The family then experiences a series of strange and inexplicable events centered around their home. Profoundly unsettled, the Palmers seek the help of psychic and parapsychologist, Ray Kemeny. Kemeny discovers that Alice led a double life. A series of clues lead the family to Lake Mungo where Alice's secret past emerges.
Advertisement:

The film was part of the After Dark Horrorfest film festival. An American Foreign Remake was to be expected out sometime in 2011, from the folks behind The Ring but it appears to be in Development Hell.

Due to the spoiler-heavy nature of the film, a lot of the trope names are themselves spoilers. Proceed with caution.