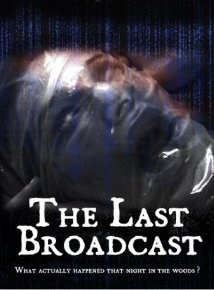 The Last Broadcast is a 1998 horror film, directed and written by Stefan Avalos and Lance Weiler.

The film is presented as documentary about the crew of a public-access cable TV show, Fact or Fiction, who went into the woods in rural New Jersey to search for The Jersey Devil, and all but one of whom are killed. While the surviving crew member - Jim Suerd - was convicted for the murder, the film sets out to prove his innocence.

The film is notable for predating The Blair Witch Project for heavy use of found footage in a horror movie setting, for being made on a budget of only $900 using 90s home computer technology and for almost every character being The Danza.

Tropes featured in this movie: