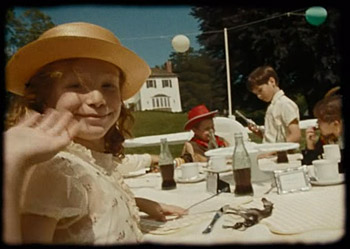 Britta: What are you doing?
Annie: You know in movies where the hero's wife or girlfriend is dead or missing and so he sits in the dark and he watches her in a home movie? We're making footage of that for me in case I get kidnapped or murdered!
— Community, "Wedding Videography"
Advertisement:

Is your character alone in the world? Have they lost a family member? Did they just break up with the love of their life? Do you want to show that no matter how much time has passed, they just can't get over it? It's easy: just have them watch a home movie of the happier times with that family member. Said movie will often include one or both parties declaring outright how much they love the other, just to drive the point home. For bonus unhealthiness points, have the grieving character rewind the tape and watch it over... and over... and over...

A character in desperate circumstances, perhaps alone, on the verge of death, or on the run, will come "home" to watch old videos of their past life, usually childhood videos or family outings, sometimes surrounded by items from their past life or memorabilia they have carried with them the whole way which turn out to be significant to learning more about their persona. A person trying to find them may find them watching the videos, even if they were strenuously attempting to avoid pursuit earlier; or the videos will have been left on.

May also be used to reminisce about life After the End or set up a Disappeared Dad or Missing Mom.

A common subtrope is watching a Wedding Video. Sometimes this is after a divorce, an affair, or something else breaking up the couple. Or maybe it's after a death leaving one of the couple behind.

Related to Troubled Backstory Flashback. If it was made intentionally prior to death, see Video Will.

This doesn't have to be a death trope, but it is often a beginning or ending trope, so it may involve spoilers.