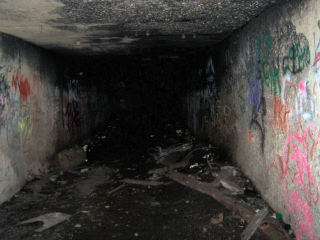 This is a Horror trope where fear isn't induced by a traumatic visual element or by a physical threat, but by the sole lack of event. When properly done, it can result in terrifying moments. It does so for one simple reason: the creator refuses to show us what's causing this horror, but we desperately wish to know, so imagination fills in the blanks and our minds provide the content, using what the individual considers scary.

It often has to do with where the events are happening, generally because said place is inherently scary, but sometimes merely because of the way it is filmed or described.

Scare chords and cues may be used to reinforce the effect, but it seems to work best when there's no music at all. The camera might slowly close in on the "nothing", either as a character musters the courage to open the door, enter the dark depths, or cowers abjectly at the impenetrable darkness.

This trope can be used in combination with several other tropes; Through the Eyes of Madness, Darkness Equals Death, Quieter Than Silence, Leave the Camera Running, Mind Screw, Kill the Lights, and Obscured Special Effects are some examples. Since the space is empty, it may also appear as a part of Space Madness, usually as the second variant. Anything will do as long as the result is scary. Paranoia Fuel is a near-must.

In Real Life this trope is why it's terrifying to walk through a familiar dark room by yourself, through the woods or a secluded street at night. This is one horror trope everyone is familiar with. It's also a reason why the Silent Treatment can be an especially damaging punishment, both emotionally and sometimes even physically. Sensory deprivation

can result in panic attacks or even visual/auditory hallucinations for some people, as the lack of stimuli makes the subconscious mind "hungry" for input, causing the brain to create its own to fill in the gap.

Compare and contrast And I Must Scream, Cat Scare, Creepy Basement, Daylight Horror, Gory Discretion Shot, Jump Scare, Monster Delay, Unseen Evil, and The Unreveal. One of the counterarguments against leaving nothing to the imagination, and sometimes an argument against Gorn as well. Dead Air can be this for radio. The Spook and the Diabolus ex Nihilo are often characterized by this trope.

Interestingly, this is probably what makes people afraid of whatever The New Rock & Roll is.

Not to be confused with Nothing Exciting Ever Happens Here, Empty Room Psych, or It's Quiet… Too Quiet. Contrast Nothing Is Funnier, where leaving details to the viewer's imagination is used for comedic effect.