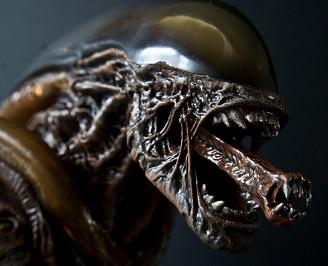 Yo dawg, I heard you like mouths. So I put a mouth in your mouth, so you can scream while you scream.
"That was necessary. The melting thing was...necessary."
— Josh Scorcher on Nightmare from Metroid Fusion, "Top Ten Scary Atmospheres"

Like the Rule of Cool and the Rule of Funny, the Rule of Scary says that if it's creepy enough, it doesn't matter how illogical it is. All that matters is that it creeps you out.

Most effective formulas for scary:

If you cannot tell from the listings below, this is overwhelmingly a Film trope. Whether this is because producers don't care about silly things like logic, or they just don't have enough time to explain every little idiosyncrasy, is a debate that will rage on for as long as the medium exists.

Compare Fridge Logic. Offscreen Teleportation is a Sub-Trope of this, as is Body Horror.

Contrast Narm, Nightmare Retardant, Rule of Cute, which negate a work's potential for fear. Also contrast Adult Fear and Realism-Induced Horror, which seek to instill fear in audiences through plausibility.