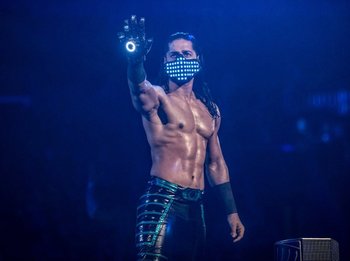 Adeel Alam (born March 28, 1986) is a Pakistani-American professional wrestler currently signed to WWE under the moniker Mustafa Ali. He began his career in his hometown of Chicago and in the independent scene around Illinois, usually working for places like AAW, IWA Mid-South, NWA, Proving Ground Pro, and WrestleCircus, all while maintaining a job as a night-shift Police officer, before being signed to the WWE after a fantastic set of matches in the WWE Cruiserweight Classic. Initially placed in the company's cruiserweight division, 205 Live, Ali moved up to WWE SmackDown in the winter of 2018 and officially joined the main roster, leaping to the top of the blue brand's card at an astonishing pace with his inspirational message, high-flying skill, and willingness to do some absolutely insane things in order to "Chase the Light".

Ali has been a former one time world champion in Dreamwave Pro, Proving Ground Pro, and Freelance Pro.