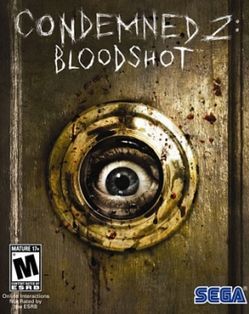 "You know better than most that there is scum in this city. Violent, hate-filled, fucking insane scum. There's no talking, no reasoning, just killing... Kill first, or be a rotting corpse for the birds."
— The Masked Man
Advertisement:

The 2008 sequel to the horror game Condemned: Criminal Origins.

Set one year later in the same city as the previous game, the protagonist Ethan Thomas has slipped into a drunken stupor, quitting his job at SCU despite clearing his name after hunting down the serial killer that framed him. When the enigmatic man from last game calls his old partner, begging to know where he is, she is sent to find him, and he is brought back to help in solving a new series of cases, seemingly related to the serial killings of yesteryear. In doing so, he begins to find out both about what makes him so special, and why everyone is always so berserk...

Bloodshot has examples of: