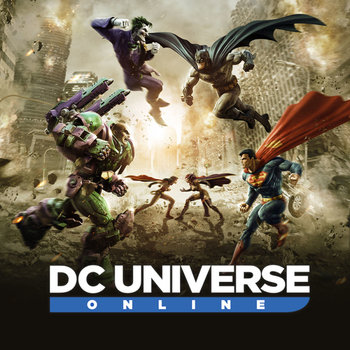 "The next legend is you."
Advertisement:

DC Universe Online is a Super Hero MMORPG, following on the heels of Champions Online and City of Heroes. The game is set in the DC Universe and allows the players to create any character they want without the usual class system of MMOs, as they can mix and match using any combination of powers (e.g. mind attacks), weapons (e.g. dual-wielding pistols) and abilities (e.g. super speed). The player character will then align themselves with either the famous heroes or villains of the DC universe, whereupon they are mentored by one of the big three of either side (e.g. Batman for technological heroes or The Joker for technological villains).

The player can explore the fully realized cities of both Gotham and Metropolis (as well as the surrounding areas during certain missions) at will as they complete quests and battle against/with other players and iconic characters from the Universe. Compared to other MMORPGs, DCUO has a bigger focus on fast-paced combat, storytelling, and player customization, as it is optimized for the PlayStation 3 as well as PCs.