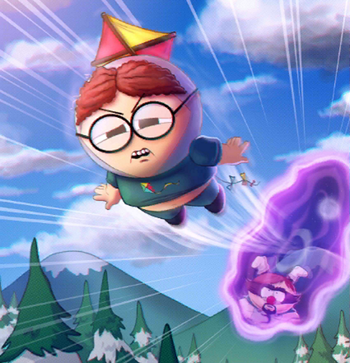 "And you're sure this isn't a fanboy thing? 'Cause I've fought more than a couple of pimply overweight vamps who called themselves Lestat."
— Buffy Summers, Buffy the Vampire Slayer
Advertisement:

Part of the appeal of fiction is the conceit that gaining super powers, becoming a vampire, or generally just making contact with the Masquerade changes an ordinary character into a cool, debonair, threatening, or just generally badass version of themselves. No matter how mundane they were in life, the touch of the supernatural is the great cosmic equalizer.

Usually getting superpowers or being Cursed with Awesome makes you, well, super or awesome. However, some characters are just so snot-nosedly uncool no amount of undeath, lycanthropy, cyborg implants, or Super Serum can change that. Maybe it's because they're too much of a Jerkass, not assertive enough or maybe they're hopelessly geeky/nerdy/ditzy. In any case, a certain Je ne sais quoi is required, and this character just doesn't have it.

Rather than become a fearsome vampire, they won't even inspire fear in old ladies... who will kick their ass. That gigantic dork who just became a Flying Brick? Far from Superman, or even an Expy, he's just a gigantic dork with heat vision. Kind of like a Law of Conservation for Butt-Monkey status. If lucky, but only then, and not likely then, they'll escape the Pretender Diss.

This trope can apply to characters of any kind, from hero to villainous minion (though not usually villains themselves, unless they're a Harmless Villain or Ineffectual Sympathetic Villain). A Super Loser hero may eventually take a level in badass or become competent in the use of their powers while being, personality-wise, the same loser they were pre-change. Interestingly, this kind of Super Loser can be very endearing. Minor villains and their minions are usually Smug Supers with an overinflated ego, frequently due to a bad case of Transhuman Treachery. Expect the Plucky Comic Relief to take them down most satisfyingly, and force them to help talk about the Big Bad's plan. Naturally, they are often Boisterous Weaklings, when they can't use their powers properly at least.

This trope is easily explained when the transformation is Blessed with Suck, so only characters who were extremely cool beforehand can keep a measure of that afterwards. Sometimes, if this character is from an older franchise and is a member of a Token Minority, they may be a victim of "Seinfeld" Is Unfunny more than anything else - since, compared with other members of their group during their own time, they were amazingly competent.

Since this happens often with vampires, see also/compare Your Vampires Suck. Do not confuse with Super Zeroes, who are merely incompetent or ineffective instead of uncool.

Please limit examples to in-story applications. Characters who only have the Fanon reputation of being a loser go under Memetic Loser.