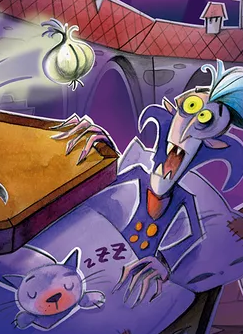 "I want a story about an Italian vampire. No romance, no action. Just 200 pages of 'What do you mean, I can't have garlic? Do you know where I'm from?'"
— Tumblr post

Vampires are repelled by garlic, whether flowers, bulbs, cloves or juice, and may be weakened by its presence. This is one of the oldest vampire tropes, dating back to medieval Europe.

Surprisingly, the vampiric aversion to garlic has some basis in biology: The 'burn skin on contact' version of this trope is similar (if exaggerated) to real life garlic allergies

, a potent anti-biotic and anti-fungal agent, and has been proven to kill mosquitos—i.e., real-world vampiric insects. In particular, though, is its use in preservation, particularly pickling. Much like salt, compounds in garlic can ward off decay, and therefore thought to drive off the undead. However, that hasn't prevented it from becoming a Discredited Trope in more recent fiction, where vampires often demonstrate, contrary to superstition, that they can eat garlic for lunch. Even those works often nod to tradition by making one certain vampire allergic to garlic.

A Sub-Trope of Supernatural Repellent and Weaksauce Weakness. Compare to Garlic Is Abhorrent.

Harry forgot that among the rest of the party-goers, he is ordering pizza for vampires too.

Harry forgot that among the rest of the party-goers, he is ordering pizza for vampires too.