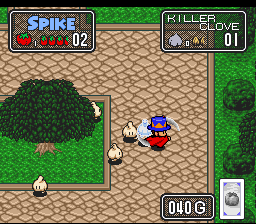 The Twisted Tales of Spike McFang is an obscure 1993 Action-Adventure/Action RPG game for the Super Nintendo Entertainment System, produced by Naxat Soft. It's a sequel to the equally obscure Japanese-only TurboGrafx-16 game Makai Prince Dobrabochan.

You play as Vegetarian Vampire Spike McFang of Vladamasco, who battles the evil General Von Hessler, a zombie who attempts to invade Spike's parents' and his friend Camelia's kingdoms. Camelia herself is playable, as is Rudy, Von Hessler's repentant son.

Gameplay is an overhead view similar to 2D The Legend of Zelda games. However, instead of a sword, Spike uses his trusty cape and magical hat to attack foes. The cape functions as an omnidirectional melee attack, while the hat works like a boomerang.

Playing cards are also used to attack, and higher levels means more damage. Spike can restore his health by drinking tomato juice and using tomato cards, but must beware of garlic cloves and other monsters that lurk about.