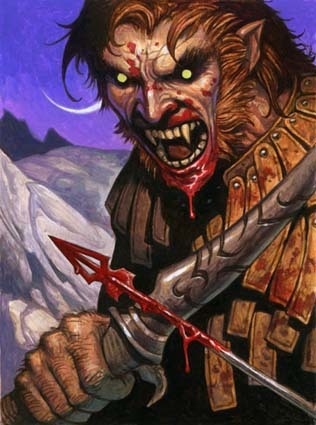 And no, he doesn't sparkle...
"Though they once walked and talked as lords amongst the chattel, these curse-born Vampires have devolved into ravening predators desperate for the taste of blood. They prowl the battlefield in packs, ready to pounce upon the least sign of weakness and tear a hole in the enemy ranks with crimson claw and bloody fang."
— Flavour Text for Vargheists, Warhammer Fantasy
Advertisement:

We all know that Vampires Are Rich, strut around in evening dress, rule over Überwald from their Haunted Castles and are often kings or queens. This was the image of the vampire born of Gothic Horror and continued for decades.

This trope is about vampires who are wild in some sense, be they outlaws, rural, or simply savage. They live a feral lifestyle outside of human society (which you might realistically expect of animalistic human predators forced to live at the fringes of society and prey on other humans for sustenance) and are unlikely to be sympathetic, unless Cool People Rebel Against Authority or the Noble Savage are in play. In some cases, it's the result of a vampire being driven insane by their need for blood. A setting with a Vampire Variety Pack will likely have at least one species of vampire be feral by default.

In many settings, it also makes more sense than the alternative: what peasant in their right mind would tolerate having a literal bloodsucking predator for a Lord or Lady?

Subtrope of Our Vampires Are Different and often of Hillbilly Horrors. See also Our Zombies Are Different, as the two are often similar, especially in the original folklore. Contrast Classical Movie Vampire and Vampires Are Sex Gods. In cases where the vampires are feral to the point of mindlessness and portrayed as evil, this trope overlaps with Feral Villain.