Literature / Scary Stories to Tell in the Dark 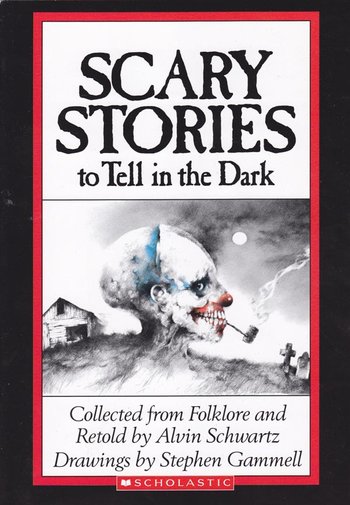 This trio of books is probably one of the most controversial series to hit American bookshelves. Scary Stories to Tell in the Dark is a trilogy of children's books written by Alvin Schwartz, made up of stories based on urban legends and local myths. These are the three volumes:

The series is geared towards extremely young audiences (not that this stops the stories from being surprisingly violent), and while the stories may be scary for an eight-year old, older audiences will find them more cheesy than anything. Instead, what makes the books so scary (and controversial) are the illustrations that accompany them.

Using little more than black ink and water, Stephen Gammell has given us some of the most notoriously terrifying pictures you'll ever see in a book. So much so that the Scary Stories are on the American Library Association's list of most challenged books (ie, Moral Guardians demanding they be pulled from library shelves), being the number one most challenged book for over a decade.

Likely because of this controversy, Harper-Collins released Scary Stories and More Scary Stories in new editions with considerably less unnerving artwork by Brett Helquist (best known for his work on A Series of Unfortunate Events). There was a price spike (and a high one!) when older editions were pulled from store shelves, but Scholastic Press, who released the books originally, still sells them with the original art. Hooray!

The stories were also collected and turned into a series of audiobooks with the same names. While they didn't contain any of the scary pictures from the books, the sometimes over-the-top telling of the stories could be a great replacement.

A film adaptation of the books, co-produced by Guillermo del Toro and faithfully adapting the infamous Gammell artwork for its monsters, was released in 2019.