Or Was It a Dream? 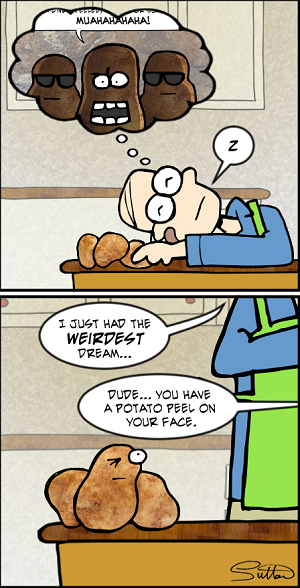 Sometimes, at the end of a Dream Sequence, Dream Episode, or an All Just a Dream episode, after the character in question has woken up and demonstrated any Aesop that the dream might have been communicating, there's some small hint that it wasn't a dream after all, even though it quite obviously was... right?

That hint is often a Fantasy Keepsake, some kind of small object from the "dream world" that was given to the character there, innocently sitting on the bedside table.

This kind of ending is quite often used by young children to create a Twist Ending, and as such it's fairly hard to execute well as a more mature writer, since it's considered a bit of a cliché by some, and some detractors even consider it a Dead Horse Trope. Still, Tropes Are Not Bad, and when done well such an ending can be used very effectively.

May be an example of The Ending Changes Everything, though those are usually even more of a Mind Screw.

Schrödinger's Butterfly may apply to what was, is, and will be the dream, and which one is real.

Related to Maybe Magic, Maybe Mundane, in that the mundane explanation has to be dreaming, yet it is not a subtrope, since not every Or Was it a Dream? scenario touches on the supernatural.

Not to be confused with That Was Not a Dream, which is when a character talks about a dream they just had and is then told that they weren't dreaming. If the dream was a nightmare, and it's subverted by having it turn out to be a dream after all, see Shock-and-Switch Ending.

Compare Real After All, Here We Go Again!, and The End... Or Is It?

Back at Wally's, Barbie, Ken and Raquelle talk together about the adventure they forgot about, thinking it was a dream...

Alternative Title(s): Not A Dream

Back at Wally's, Barbie, Ken and Raquelle talk together about the adventure they forgot about, thinking it was a dream...