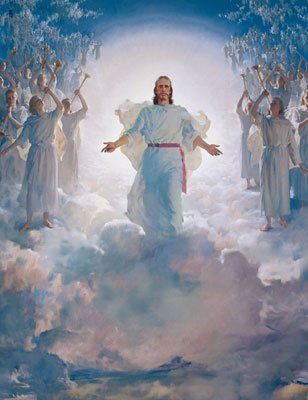 Guess who's back. Back again. JC's back. Say "Amen."
"Let not your heart be troubled: ye believe in God, believe also in me. In my Father's house are many mansions: if it were not so, I would have told you. I go to prepare a place for you. And if I go and prepare a place for you, I will come again, and receive you unto myself; that where I am, there ye may be also."
— Jesus, John 14:1-3, The Bible
Advertisement:

This trope is normally associated with characters whose prophesied (or at the very least, expected) return indicates a salvation of some sort, similar to the Second Coming of Jesus Christ. The character in question may or may not be fully aware of the Messianic Archetype role he or she is supposed to fulfill with his or her return to a society in desperate need of a hero to either set right what once was wrong in his or her absence or to bring them to The Promised Land. The reasons for the character's absence in that society can include going on a long journey or going into self-imposed exile from the society that doesn't see any need for him or her or even accidental Time Travel into what turns out to be a Bad Future. Sometimes it may even involve the death of the original hero and that his or her return would come in the form of some future incarnation, like a Clone Jesus. In any case, the return of said character with whatever power he or she may display to provide deliverance will validate the faith of those patiently waiting for the character's return as they have elevated him or her to messianic status during the absence.

Related to Rightful King Returns. Not related to Boldly Coming.