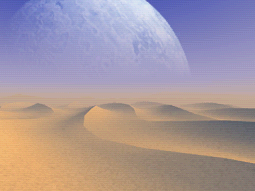 At least this one has a pretty moon.
Advertisement:

When you mention the word "desert" to somebody, they'll probably think of miles of nothing but sand, maybe a cactus here and there, and towering sandy dunes dotting the landscape. When these places appear in fiction, there will be a great deal of emphasis on their vastness, emptiness and monotony — in the desert there are no landmarks or recognizable features anywhere, just endless rows of identical dunes, making it extremely difficult to distinguish any one spot from another and thus to mark progress or direction.

This is not a place where people typically go to of their own volition; characters in these deserts were either stranded here or are trying to travel between places separated by the desert. In either case, their goal is to get out; this is easier said than done, however, since finding one's way around is so difficult. It's hard to find directions, when the only landmarks all look like each other and are always changing shape and position, and it's even harder to tell where you are in the waste — were you supposed to turn left at the thousandth dune or the thousand-and-tenth? Are you just into the desert, far into its depths or close to the edge? Are you even going in the right direction, or have you been Going in Circles for the past week? It's hard to tell — even your footprints are blown away by the desert wind.

The Sea of Sand is also very, very empty — there is no water here, no food, no resources or useful things; there is only sand. You only have what you took with you going in, and you've better hope it will last until the end of the crossing. Of course, you may be lucky and find an oasis — unless it's an improbably realistic mirage. If there is a town here, it's likely poor, isolated, or a Wretched Hive. The only exceptions are the opulent hideouts of Desert Bandit gang lords or of incredibly rich sultan or pharaoh figures. Other than that, the only inhabitants of the sands will be desert nomads, who are uncannily good at finding their way in the wastes, and vultures who will soon start trailing travelers. More probably, however, you won't see a single living thing until — unless — you finally crawl your way, hand over hand, to the edge of the sandy wastes and into civilization once again.

This popular image, it should be noted, is in large part Artistic License – Geography. While true sand seas, formally known as "ergs"note taken from the Arabic word for this sort of terrain, do exist, hot desertsnote "desert" technically refers to any barren environment with little precipitation, including polar ice caps are more likely to be rocky and hilly, with rock formations and loose gravel; even in true sandy deserts like the Sahara and the Arabian desert, extensive badlands and rock formations are fairly common. A helpful analogy is that large deserts contain ergs in the same way that a large wetlands region contains bodies of water; scatterings of lakes are more common than horizon-spanning inland seas, and the latter are noteworthy in large part because of their rarity.

Some particularly extreme cases will overlap with Sand Is Water by having a very literal sea of sand, complete with sand ships and whale-like creatures swimming in the dunes.

Compare Shifting Sand Land for the video game version and Thirsty Desert when basic survival is the main concern rather than keeping your bearings. This often occurs on a desert-based Single-Biome Planet. May also contain a Desert Skull. See also All Deserts Have Cacti for the only noteworthy features you'll find here.