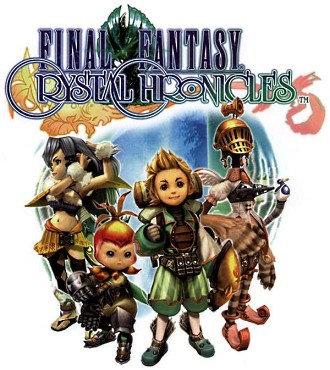 "Come, let us record your adventures in this journal. It shall be known as the Crystal Chronicles."
Advertisement:

The first game in the Final Fantasy Crystal Chronicles series, this was also the first installment of the boil-lancingly popular Final Fantasy franchise made for a Nintendo system since the SNES. It was released on the Nintendo GameCube as an action RPG, but also famously required GameBoy Advances for multiplayer. The game sold well, but the requirement is considered a big reason it didn't sell better.

The basic plot is as follows: Hundreds of years ago, the whole world became covered in a toxic miasma. If you breathe too much of it, you die. So how do the people survive? Turns out that special crystals have the power to repel the miasma. However, their power isn't endless: they must be replenished with myrrh about once a year. In order to survive, each town sends out their own "crystal caravan", to collect myrrh from myrrh trees (all inconveniently placed at the end of a dungeon) and then return home. Lather, rinse, and repeat indefinitely.

The player is from a small village, called Tipa by default, but it can be renamed whatever they want. Characters can be any of four tribes/races:

The story is told in a non-linear fashion, with information given to the player as their caravan runs into others on the road, or talks to people in town. Much of the exposition is given by the Narrator, voiced by Donna Burke, who tells the story of each location the first time the players enter it.

A remaster was released for PlayStation 4, Nintendo Switch, and the Android and iOS mobile platforms, featuring global online multiplayer with cross-play and cross-progression, additional voice acting, and new content including outfits, dungeons and bosses.