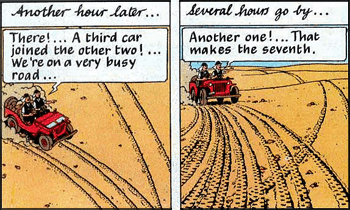 The Thompsons going in circles...
"You ever watch The Flintstones? Well, did you ever notice how Fred would run by the same thing over and over again? Third time past this tree."
— Libby, Lost (fittingly)
Advertisement:

The characters take a recommended short cut or are traveling through uncharted territory. After a while a character will see a notable marking, and point out that they passed one just like it half an hour ago, and an hour before that...

When normal people get lost, it tends to be a gradual realization. But having a group suddenly realize they're at a landmark they passed earlier allows one moment of despair at being lost, and quite definitely no closer to their goal. It can also imply that something weird is going on.

Occasionally it won't be a landmark, but a set of footprints. Either the presence of footprints where you wouldn't expect anyone else, or the revelation that a character is following his own trail.

Compare Unnaturally Looping Location, Hot on His Own Trail.