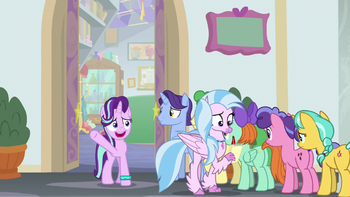 It is near the Spring Solstice, and Twilight and her friends have gone to Canterlot to participate in events there. Starlight Glimmer has stayed behind to help make sure the students all get to leave in time for spring break, but because there's no other teachers, all the students are coming to her for advice as the student counselor. Because of the influx, Starlight has enchanted a bracelet to respond whenever anypony knocks on her door, allowing her to teleport to her office on the spot.

However, Trixie arrives, reminding her about their own Spring Solstice party that is going to be hosted by Maud and Mudbriar. There are a number of preparations they need to do, including getting various party decorations and learning how to make a special cake from Mrs. Cake, but the constant interruptions from the students forces Starlight to keep returning to her office. This leaves Trixie having to do most of the work itself, which annoys her so much that she barges into Starlight's office to demand that she take off the bracelet and make time to help with the party and herself. Despite students, including Silverstream, still trying to get advice, Starlight takes Trixie's suggestion and takes herself off duty. She declares the school closed, sending all the students to their homes.

The Solstice party is seemingly going okay, but the lack of Starlight's efforts into the preparation leaves it less than the effort that a Pinkie party would be. Suddenly, Terramar arrives (he was told to find Starlight there). Terramar tells them that Silverstream never arrived home when she was scheduled to, and the hippogriffs are searching the lands for her, while he was assigned to check the school. Starlight goes with Terramar, and finds that Silverstream was studying about cockatrices in the Everfree Forest. Fearing that she might have gone there and gotten turned to stone, Starlight, Trixie, Sunburst, Maud, Mudbriar, and Terramar set off to the Everfree Forest to search.

After getting turned around a few times, they finally encounter the nesting grounds of the cockatrices, but they find no sign of Silverstream. They are suddenly set on by the cockatrices, and the group scatters. After getting herself to safety, Starlight teleports to rescue all the others, but it is too late for Mudbriar, who has been petrified already. With cockatrices still attacking, the group takes shelter in the Castle of the Two Sisters. Starlight laments about the situation being her own fault when Trixie asks about the Treehouse of Harmony. Realizing that was the first place they should have searched, they enter and find Silverstream appearing to be attacked by a cockatrice. But it turns out that Silverstream has tamed and befriended the cockatrice, which she has named Edith, as part of an assignment that Twilight had given her before the spring break. Edith unpetrifies Mudbriar, and the group returns back to Maud's home. Starlight realizes she can't be available for her students all the time, but Silverstream also realizes that it wasn't fair to Starlight for them to come to her with any silly old question, and they agree that having set office hours would be better for all.