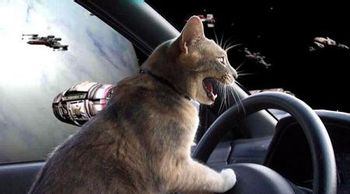 Dammit, I'm not lost!
Minny: Oh, for the love of Chrysler! Can we please ask someone for directions?
Van: [deranged] No! There's an on-ramp close! I know it! I can feel it! Ah-ha-ha-ha-ha!
— Cars
Advertisement:

A Directionless Driver is a character who actively refuses navigation aid when traveling. He will ignore anyone who tries to help them, and adamantly rebuff companions who suggest asking for directions. Things will get worse if the Directionless Driver has maps or a GPS, as he'll use them as evidence that he already has all the information he needs.

The Directionless Driver is almost Always Male, pertaining to the stereotype that men never ask for directions. This trope is also typically used to portray him as taking deep personal pride in doing things his own way.

In reality, it could stem from the fact that men used to do the vast majority of driving (and in some places, still do). A woman might be just as reluctant to stop and ask a stranger for help — especially at night — but if she's not driving in the first place... For why she wouldn't be allowed to drive, see her own bad driving stereotype.

For the record, while the Directionless Driver in general is Truth in Television, the gender difference may not be. A MythBusters test of 14 drivers, 7 male and 7 female showed that male drivers that took part in the test do tend to ask for directions sooner than female drivers (a minute sooner on average, with the average male taking just over 4 minutes, and the average female taking just over 5), and both men and women were equally likely to stop (six out of seven of each gender did stop).

One of the classic Stock Shticks, and a sister trope to No Sense of Direction. Also see You Can't Miss It, Shortcuts Make Long Delays, and Too Dumb to Live. Compare and contrast with Women Drivers.