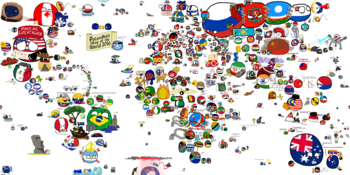 This isn't even the whole cast.note Here's the full image.

◊
"Polan can into TV Tropes!" * But cannot into space.
Advertisement:

Polandball is a series of user-comics that uses spherical Anthropomorphic Personifications of various nations to satirize international relations, both contemporary and historical. It started with Poland (obviously), but it quickly branched out to other countries as well. Having its origins on a German ImageBoard, it originally featured National Stereotypes and extreme political incorrectness but has grown to include Engrish, history and geography jokes.

Compare Scandinavia and the World and Hetalia: Axis Powers.

Examples can be read here

Currently, a character page has begun construction. View it, and help build it here. Feel free to move character-specific tropes there, as well.

Other works in and related to the Polandball series: