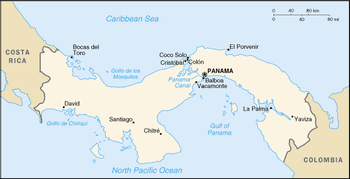 "A man, a plan, a canal - Panama"
Palindrome coined by Leigh Mercer
Advertisement:

Panama is a Central American country and the southernmost country in the continent of North America. Before 1903, Panama was just another province of Colombia. Even before that, it was an isthmus discovered by Spanish explorer Vasco Núñez de Balboa

in 1510. He deemed this narrow girth suitable for a trade shortcut between the Pacific and Atlantic Oceans. Since then, Panama became known as the "Camino Real" (Royal Way)... but locals also have a less-than-flattering name for it: "Camino del Cruces" (Way of Crosses), because there's the chances of dying within its treacherous, mosquito-infested jungles before one can even reach the other end of the isthmus.

For all its potential wealth, however, Panama proved to be a geopolitical headache for the rulers in Bogota. Isolated from the mainland by the formidable Darién marshlands

, Panama was rocked by indigenous rebels and Dutch/English pirates, as well as the occasional freed African-American group. One English privateer, Sir Francis Drake

, was so successful Spain only managed to pacify him by forging an alliance with him, guaranteeing Drake freedom in exchange for providing them with military support. And even when Spain finally completed its conquest of Panama, the same nationalist spirit started to pervade its new Spanish majority.

Even as New Granada is shaking off Spanish rule, separatists in Panama City, the trade route's southern terminus, are slowly influencing José de Fábrega, the colony's staunchly loyalist head of military, to turn to their side, giving them an advantage. After some negotiations with Simón Bolívar, in 1821 Panama was admitted to the newly-independent New Granada, now under the name Gran Colombia, and would maintain a precarious alliance with Colombia long after Gran Colombia broke up — which would also break down like it did with Venezuela and Ecuador.

At the same time Panama soured up to mainland Colombia, the Americans began showing interest in continuing an audacious plan abandoned by the French — to cut a waterway through the isthmus, allowing for faster maritime travel. When the Colombians refused to ratify a treaty granting America a six-mile-wide (9.7 kilometers) strip across the isthmus, within which the canal would be built, then-President Theodore Roosevelt assisted the Panamanians' drive for independence by placing a Naval Blockade on Colombian waters, allowing the Panamanians to declare independence in 1903.

During The Seventies the country became a dictatorship under General Omar Torrijos. When he died on a mysterious plane crash, his dictatorship became a Banana Republic under the command of CIA pawn Manuel Noriega, who then became a despot rebel. His reign ended when the United States invaded in 1989, removing Noriega in an attack called "Operation Just Cause", notable for the first use of the F-117A Nighthawk... destroying half the city in the process. Since then, it's been a democracy and has been fast-growing economically. It is today the third richest country in Latin America (after Chile and Uruguay) and the richest in Central America.

Like its northern neighbor, Costa Rica, Panama is one of the few countries to have no standing army, having abolished it after Operation Just Cause. It still maintains a small paramilitary force, the Panamanian Public Forces

Panama's most famous feature is the Panama Canal, fully under the control of Panama since 1999, although the US retains the right to intervene to ensure the free use of said canal if need be. The canal was built, at great expense of life (estimated at 27,500 for the two attempts), between 1904 and 1914, after a failed French attempt in the 1880s. It is a major shipping route for the obvious reason that one would otherwise have to go round Cape Horn instead, an area known for strong winds.

The canal's lock dimensions are a major factor in shipping design, with many ships built to "Panamax"

Panama is well known as a "flag of convenience"

for shipping, a status going back to the Prohibition era.

The famed Pan-American Highway spans a majority of Panama, and is the main east-west route connecting regions of the country. It doesn't serve the Colombian border due to the dense Darién Gap, which leaves the only gap to this highway.

Panama is a tropical nation rich in wildlife, including sloths, harpy eagles (the national bird), jaguars, and brightly-colored frogs. Panama is home to a biological focused Smithsonian Institution bureau, the only one based outside the U.S.

As a final note, in 1698, the then-independent Scottish government attempted to colonize Darién. The expedition was an Epic Fail: dysentery, malaria and the natives made short work of the ill-prepared colonists. By 1700, most of the 4,000-person strong colony were dead, taking with them a quarter of the total wealth of Scotland. To deal with the debt, Scotland merged itself with England. And that's how a land half way across the world created the United Kingdom.

The flag's blue and red quarters symbolize Panama's conservative and liberal factions, respectively, and the white quarters signify peace and harmony between both parties. Blue and red can also symbolize the seas and the blood shed by its liberators, respectively. The blue star represents purity and honesty, while the red star authority and the law.
Miscellaneous