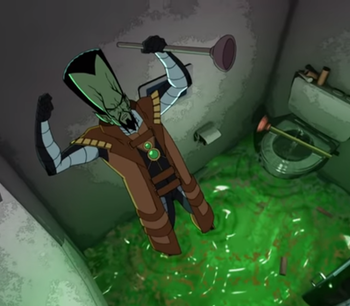 “IS THERE NO GOD?”
Shadowhog: As punishment, you must clean my filthy toilet of filthy piggy filth with your enormous head! It's over there!
Dib: That's it? That isn't so bad! (looks inside) No! Nooo! Oooh! Naaa! Oooh! Oh!
— Invader Zim, "Gaz, Taster of Pork"
Advertisement:

Let's face it: Cleaning messes other people made really, really sucks. Unless you're a Neat Freak, you'll probably dread it when you need to go and mop up after someone else. Combine this general annoyance with the disgusting, germ-filled, smelly nature of bathrooms, public or private, and you get this trope: A character being forced to go and clean toilets, much to their misery.

A character who has to do this usually isn't high on the authority ladder. In fact, they're often seen as the lowest of the low, the one who gets to be demeaned and given the worst jobs. Maybe they're just The Unfavorite or the Boss's Unfavorite Employee, and everyone else gets the better chores- if they even get chores at all. Or, maybe this is a punishment, a way to keep people in line while also keeping the toilets clean. The bottom line? It's not something the people with power are going to be doing, and that's what this trope signifies.

The cleaning might not be shown on screen, but if it is, expect them to be having a horrible time. Otherwise, their disgusted reactions outside the bathrooms are often enough to sell the trope. Exaggerated examples might put the character in protective gear, such as a hazmat suit. It's not always Played for Laughs, but if it is, it's pure gross-out comedy mixed with a little Schadenfreude; the audience knows how disgusting these bathrooms are, and they see the character's comedic suffering at the same time. If they deserve this fate, then the disgust is also mixed with a little karma. Sometimes, a character who's really desperate to avoid doing something will reference "cleaning bathrooms" as something they'd rather do, the joke being that they Would Rather Suffer.

In works involving militaries, this might cross over with latrine duty. As a matter of fact, many militaries in real life have this as a punishment, explaining the prevalence of it in fiction.

Mucking out stables, kennels, or zoo exhibits is often depicted similarly, although the disgust factor may be slightly less extreme when it's not other humans' wastes being cleaned up.

The Disgusting Public Toilet is a common setting for these scenes. In some cases, this may be combined with Intentional Mess Making, where a character deliberately destroys the bathroom just to force someone else to clean up after them. It can also overlap with Toothbrush Floor Scrubbing and Kids Hate Chores.

Truth in Television as anyone who's had to scrub toilets can attest. However, as this is such a common job in real life, No Real Life Examples, Please!