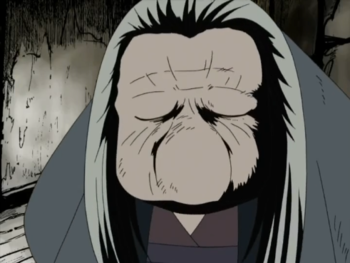 Five seconds earlier, she's eating something.
Lady Like: We already have a brand new mouth to feed!
King Dedede: Then you're lucky these two ain't got no mouths!
— Kirby: Right Back at Ya!, The Fofa Factor
Advertisement:

A character whose mouth is not depicted because they lack one or it is otherwise obscured. When used in the same vein as obscured eyes, it can create an expressionless and enigmatic character. This can be compensated by fleshing out other aspects of the character, such as giving the character unique vocal inflections (i.e., a really good voice actor) or subtle physical animations other characters would not get. Sometimes this is done for artistic reasons to call attention to something in the background that would otherwise not pull attention.

More economically, it makes animation (and especially dubbing) much easier. Lately seen as a cheap and dated trick.

This is even occasionally a role with animal mascots where the more 'realistic' pet doesn't move their mouth when speaking; dialogue is hard to sync when your talker can't actually make proper faces.

If the character doesn't have any facial features, they're The Blank. If a character without a mouth still talks, forms of Action Figure Speech will be often be used to show they're talking. If the character only has a mouth when they are talking, they have Sudden Anatomy.

Does not always count in Super Hero shows, as obscuring masks are canonically common accessories from comic books. Not to be confused with Wipe That Smile Off Your Face, which is much more horrific, nor with Harlan Ellison's story I Have No Mouth, and I Must Scream. Contrast Too Many Mouths.