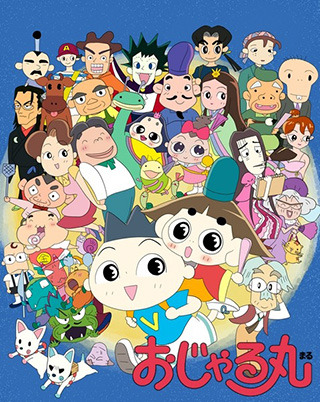 Ojarumaru is an anime series that follows the daily adventures of a 5-year-old Heian era prince named Ojarumaru Sakanoue who accidentally time-warps to modern day Japan and lives with Kazuma Tamura's family after being invited to live there by Tomio (also known as "Tommy"), Kazuma's grandfather.

While Ojarumaru befriends many of the citizens, animals, and insects that live in Moonlight Town and discovers many new things he has never seen before in his time period, three oni siblings, Aobee, Kisuke, and Akane (who are also known as the "Oni Child Trio") constantly pester him into returning a powerful scepter he stole from their father, Great King Enma, which he uses in order to judge the dead. The oni try many, many times to retrieve it, but all their attempts fail in the end.

The series was originally created by Rin Inumaru in 1993, as a manga that was serialized in Shogakukan's Ciao magazine.note However, due to the lack of documentation of the manga's history, it's unknown how long it actually ran. It eventually was adapted into an anime in 1998 (directed by Akitaro Daichi), and has been running ever since on NHK E-Tele, becoming their second longest-running anime (just behind Nintama Rantarou) and the third longest-running anime of all time (behind the aforementioned Nintama Rantarou and Sazae-san), currently having over 1,800 episodes produced up until this day.

Not to be confused with Ojamajo Doremi.