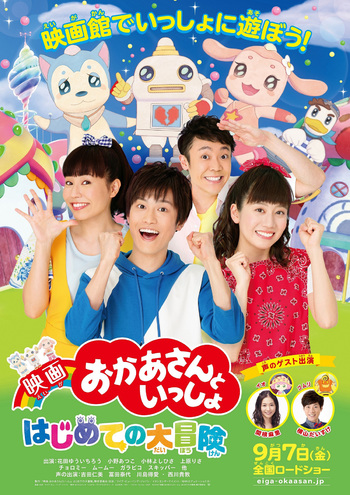 Okaasan to Issho (roughly translated, "With Mother") is a long-running show on NHK in Japan (since 1959) aimed at preschool children, much like The BBC's Watch with Mother. The show is a collection of sketches, songs and dances, many designed to be interactive with the child's parents (specifically, Mommy, see Housewife below). Actual children are usually part of the show and interact with the hosts.

The show's hosts are four young adults, two dancers/gymnasts and two singers, one of each sex, respectively. New hosts are rotated in roughly every five years to keep the hosts young (and more relatable to children, one would suppose). Many prior hosts have gone on to become pop stars and actors in mainstream Japanese culture. Additionally, there are four full body suited actors playing a series of characters and skits. These, too, are constantly changed out every few years (though it's possible it's the same people in the costumes).

Animated shorts that played in the series include:

The current hosts are:

The show can be seen in the United States on the premium Japanese-language channel TV Japan weekday and Saturday mornings. Saturday shows are generally reruns or broadcasts of the show's Family Concert events.

Okaasan to Issho provides examples of the following tropes: