Series / Sigmund and the Sea Monsters 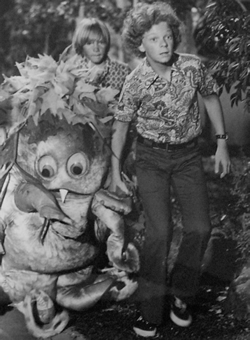 "Now Sigmund the Sea Monster, and Johnny and Scott are friends"
This Saturday-morning series, produced by Sid and Marty Krofft Productions for NBC, starred Billy Barty as a sea monster named Sigmund who found his way into the human world. He was befriended by two boys who helped Sigmund elude his sea monster family.
Advertisement:

The series ran for two seasons, from 1973 to 1975. It was the first Krofft show to last more than one season.

In 2016, as part of Amazon Studios Pilot Season, a brand new pilot featuring an updated, slightly tweaked version of the show with much higher production values made its debut. Six more episodes were released in October 2017.