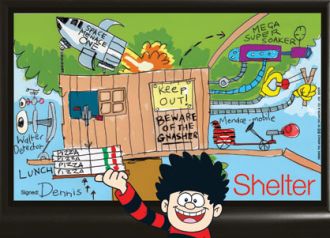 He actually builds this. Somehow.
Treehouses make a great place for kids to hang out. They're located in the great outdoors, provide a high vantage point, and are naturally secluded — but just close enough to sneak into the kitchen for sandwiches and lemonade. They make good clubhouses, and "no babies allowed" is an easy enough rule for them to make when they're up so high. Rope ladder optional — otherwise just nail a ladder of boards to the trunk. For some reason this trope is prevalent in Western Animation.
Advertisement: