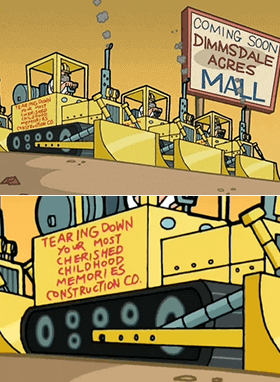 You know that big tree you used to play in as a kid? Well, you're twelve now, so you're old enough for the Childhood Memory Demolition Team to arrive and tear it down to build a new suburb/highway/bypass/parking lot/skyscraper.

This demolition is often planned when a character is about to leave their childhood. The Memory is usually a house, an orphanage, sometimes even a small apartment building. If it's a big tree, expect a bonus Green Aesop. Whatever it is, it has great emotional value to the protagonist and friends.

Expect the young protagonist to have flashbacks and then try to protest the demolition team with mixed results. Temporary hold-offs like chaining yourself to the tree and deception will at first appear not to work. Eventually, the Childhood Memory Demolition Team will give up due to The Power of Friendship — or they will succeed, giving the protagonist the Aesop that nothing lasts forever and you should sometimes let go of things.

See also You Can't Go Home Again, It's All Junk, Death by Newbery Medal, End of an Age.

Not to be confused with the apostles of Rule 34, who tend to ruin childhood memories in an altogether different fashion.

Compare Saving the Orphanage and Community-Threatening Construction where it's more than someone's childhood memories being destroyed. Doomed Hometown is an even broader version, largely used to boot the hero on his way to a life of adventure.